The Presidency has issued a statement countering media reports that President Goodluck Jonathan admitted that the Nigerian National Petroleum Corporation (NNPC) wrongly withheld $10b from the federation account.

Read full Denial as issued by Reuben Abati,Special Adviser to the President on Media & Publicity, below:

Reports in some domestic media today which quoted President Goodluck Jonathan as "confirming" in Amsterdam that the Nigerian National Petroleum Corporation (NNPC) wrongly withheld $10 Billion from the federation account are completely false and a total distortion of the President's comments during his meeting with the Nigerian community in the Netherlands.

At no time during the well-attended reception did President Jonathan also confirm any "irregularities" in the NNPC.

Sensational reports in the media to that effect are reckless, mischievous and unprofessional misrepresentations of the President's restatement to the Nigerian community of the Federal Government's position on the allegation that $20 Billion is "missing" from the NNPC or the Federation Account, by reporters who were not at the event or even in Holland at all.

President Jonathan's verifiable words while responding to questions from members of the community on the allegation and other domestic issues were clear and unambiguous.

After asserting that allegation that various sums - $49.8 Billion, $12 Billion or $20 Billion - were missing are inconsistent and lacked credence, the President's exact words were as follows:

"As at the time, the Finance Ministry was saying they had not been able to reconcile only 10 billion dollars. There are issues in NNPC but we are on it."

President Jonathan went on to say that to reassure Nigerians of his administration's continued commitment to openness, transparency and probity in the aftermath of the unsubstantiated allegations, the Federal Government had authorised a professional forensic audit of NNPC accounts to clear the air.

The Presidency deplores the mischievous and unethical distortion of his comments in the media today.

Once again, we urge the media to show greater regard for truth and accuracy when reporting on the President.

Reuben Abati
Special Adviser to the President
Media and Publicity 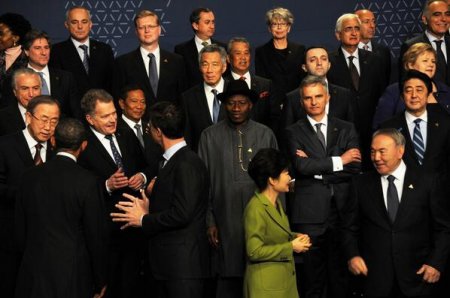