FREE Nigerian Business Directory
✅ NEW - get your business listed and your information shared across social media.
Ad
Former US First Lady Michelle Obama has disclosed that her husband, former President Barack Obama wore the same tuxedo for all of his appearances during his eight years in office. 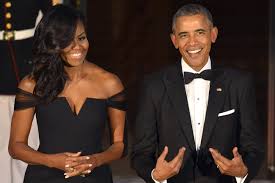 According to Us Weekly, the former first lady revealed this during her talk at Apple’s Worldwide Developers Conference on Tuesday. She said, That’s the unfair thing, No matter what we do, he puts on that same tux.”

“Now, people take pictures of the shoes I wear, the bracelets, the necklace, they didn’t comment on that for eight years, he wore that same tux, same shoes.”