Metro Pro-Biafra Protests: It is Not In The Interest Of South-East People - Okorocha

Chairman of Progressives Governors’ Forum and Imo State Governor, Chief Rochas Okorocha, is currently arranging a crucial meeting with other governors in the South-East, over the growing agitation by protagonists of Biafra, saying the protests could not be in the interest of the south-east people but were only sending wrong signals to the rest of Nigerians. 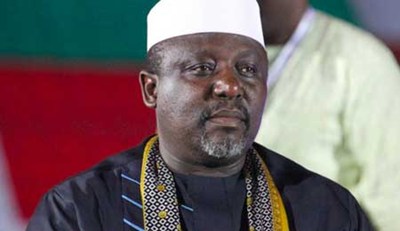 Members of the Indigenous People of Biafra, IPOB, yesterday, shut down markets in Aba, Abia State, in continuation of its three-day one million protest march calling for the release of their detained leader and Director, Radio Biafra, Nnamdi Kanu.

Similarly, Movement for the Actualization of Sovereign State of Biafra, MASSOB, said it had mobilized over 2,000-members for a peaceful protest in Ebonyi State.

Governor Okorocha in a statement through his Chief Press Secretary, CPS, Mr. Sam Onwuemeodo, said the leadership of Ohaneze Ndi Igbo, and other stakeholders in the geo-political zone, were also being invited to talk and agree on how to check the activities of pro-Biafra groups in the area.

“The meeting is expected to take place this weekend in Owerri, the Imo State capital. Already the Governor has begun to make all the necessary contacts to ensure that all those expected to be at the meeting, would be in attendance”, Onwuemeodo said.

It will be recalled that Okorocha had earlier, while taking exception to the pro-Biafra violent protests in some of the South-East states and few other neighbouring states, disassociated the governors and leaders in the South-East states from the MASSOB protest, describing the whole exercise as “embarrassing, disturbing, counter-productive and to a large extent, distracting”.

“It has become increasingly necessary for the governors in the zone, Ohaneze leaders and other stakeholders in the area to meet, to call a spade, a spade”, Okorocha said.