Curators
For Sale - One Bedroom Executive Flat - Lagos (NGN37m)
✅ NEW - car park, swimming pool, 24 hours light/security and more.
Ad
Students of Government Science School, Lafia, Nasarawa State yesterday protested against the killing of one of their colleagues by the son of the state governor, Khaleel Al-Makura. 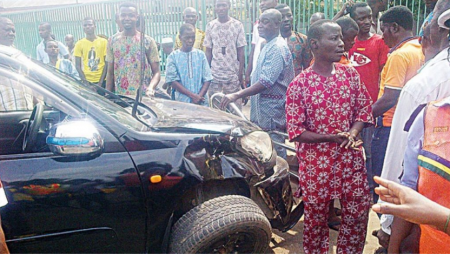 Head-boy of the school, Goodluck Aguu, who gave the name of the deceased student as Amos Ovey, said the deceased went to buy battery because there was no light in the school. “The alleged killer was on top speed and crushed him to death. We just heard the noise of the crash.”

Another eyewitness said the driver was infamous for rough driving and would have been lynched if he had not disclosed that he was the governor’s son. Confirming the incident, Police Area Commandant in charge of Lafia, Maikudi Shehu, said the culprit was already in detention. He said the driver and the car were in police custody and assured the public the police would ensure justice is done.

The protest was curtailed with the intervention of the Commissioner of Education, Tijjani Ahmed, and the police, who calmed the students down and persuaded them to go back into the school premises.

Addressing the students, the Commissioner of Education appealed to the students and family of the deceased to remain calm, while assuring them that the culprit would be brought to book, adding that since the accident occurred around 8p.m. on Sunday, the school authorities have not rested.

He appealed to the family to take solace in God, saying the governor had already constituted a committee that would meet with the family and begin burial arrangement for the deceased.

At the time of filing this report, Ovey’s body had been taken to his village in Mada Station, Nasarawa, Eggon Local Council for burial.