Politics Protest Will Continue Until Okorocha, Ekweremadu Emerges As President in 2019 – Ohanaeze Youths

“A Nigerian President of Igbo extraction is desirable in 2019 after President Muhammadu Buhari. An Igbo presidency will boost the unity of Nigeria. Former President Ibrahim Babangida said he will back an Igbo if he finds one; but we assured him and other Nigerians that Ndigbo have credible personalities who have the capacity to govern Nigeria", He said


Babangida had said in a recent interview that he will back an Igbo for the presidential seat in 2019 if he finds a credible personality. 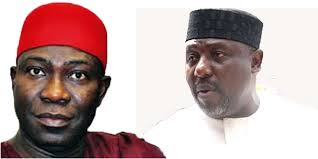 Similarly, Gowon had openly canvassed for an Igbo president to pilot the affairs of Nigeria in the nearest future.

He explained that an Igbo presidency would finally heal the scars left by the unfortunate civil war and the marginalization of Ndigbo in the affairs of the nation.

A proposed govt by assimilation.

Getting you people killed is the worst idea ever! Besides unless you received an email from heaven, what makes you think you'll survive to 2019?

SouthEast need to get it right,that their desire is good but not I'm so sure they attach value to it.

Curators
All that happens in Africa once autonomy is given is that there will be infighting and abuse of power. All regional groups should use the same energy and passion to FORCE their LGAs, Governors, Assembly members to deliver. They should DEMAND more from all of them. The problem is not separation, if all of the groups in the north, west, east, and south focus on demanding that the governors and other politicians do not waste their time and money, the whole country will be better for it.