A chieftain of the All Progressive Grand Alliance, Chief Chris Uche, says the spirit of the late Leader of the defunct Republic of Biafra, Dim Chukwuemeka Ojukwu, is behind the recent pro-Biafran agitation.

He said this in Owerri on Thursday at the third memorial anniversary of Ojukwu.

Uche added that Biafra would be declared a sovereign state without the shedding of blood. 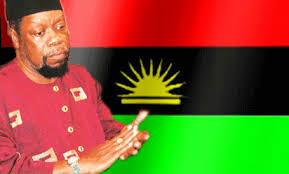 He also noted that those who died for the Biafran cause would never be forgotten.

Uche, who is also a former Commissioner for Housing in Imo State, said that the time for the realisation of Biafra was drawing near.

He said, “Ojukwu gave us a template. He is still alive in our minds. Chief Uwazuruike’s yearly remembrance ceremony in his honour is bringing the time closer for the realisation of Biafra. We shall keep the flag flying and we shall achieve it without shooting of gun.