For Sale - One Bedroom Executive Flat - Lagos (NGN37m)
✅ NEW - car park, swimming pool, 24 hours light/security and more.
Ad
The Federal Government on Tuesday in Abuja earmarked N433.4 billion in the 2016 budget for its services in the Ministry of Power, Works and Housing led by Babatunde Fashola.

President Muhammadu Buhari stated this on Tuesday in his 2016 budget speech delivered at the Joint session of the National Assembly.

He said it was the intention of government to raise the percentage allocation for capital expenditure in future. 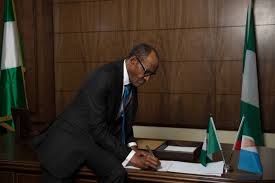 Capital expenditure will represent 30 per cent of our total budget

Works, Power and Housing to the tune of N433.4 billion.

The President said these investments in infrastructure and security were meant to support the nation’s reforms in the Agriculture, Solid Minerals and other core job-creating sectors of the nation’s economy.