Sports Read: Siasia’s Comment after His Side’ Embarrassing Defeat to Denmark 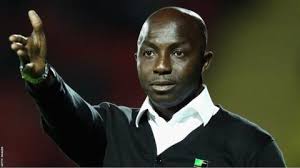 The Dream Team VI lost their second match of the tournament, losing 6-2 defeat Denmark in the four-nation Suwon invitational tournament.

“We got it wrong from the blast of the referee’s whistle; we made so many mistakes," Siasia told media after the game.

"We didn't play like we were meant to. The Danes did not play so well in their first game but they were tactically sound and we simply did not know how to defend against them.

"There were too many blunders on our side. We allowed them to control and pass the ball, and that's how we got killed. It's so embarrassing.

"I have never lost by six goals anywhere since I started my coaching career. All the same, that's why we are here, to look at the guys that can play, and the ones that we can take to the Olympics.

“It is very embarrassing, not because we lost, but the way we lost. Now, we have to snap out of it. We still have one more game to play, we will work hard to see that one turns out differently," he concluded.

Nigeria face Honduras in their last game at the tournament on Monday at the Bucheon Sports Complex.