The House of Representatives have summoned the Minister of Transport, Rotimi Amaechi, the Managing Director of NRC Seyi Sjuwade, former Chairman of the Peoples Democratic Party, PDP, Dr Mohammed Bello Haliru and former Minister of Transport, Idris Umar to explain their stewardship and role in an alleged contract scam going to the tune of N1 trillion in the Nigerian Railway Corporation.

They are expected to appear before the ad hoc committee on Tuesday to give accounts of their roles during the investigative hearing. 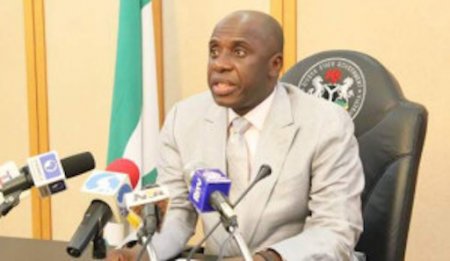 Chairman of the ad hoc committee Rep Johnson Agbonayinma explained, “The Minister of Transport, Honourable Rotimi Amaechi, was also invited to tell us all he knows, though he just assumed office, but you know government is a continuum,

“This 8th House is 100percent in support of President Muhammadu Buhari’s crusade against any form of corruption”.

“We are not out to witch hunt anybody but anyone found wanting in the course of this investigative hearing will be adequately exposed although as you are aware not until it is proven by a competent court that such persons are guilty you can’t say they are guilty”.

Recall that during the last investigative hearing on December 10, former Chairman of the NRC board, Bamanga Tukur denied that any contract was awarded by the board he chaired.