National Chairman of the All Progressives Congress, APC, John Odigie-Oyegun, has said that the defection of Nuhu Ribadu, former Chairman of the Economic and Financial Crimes Commission, EFCC to the Peoples Democratic Party, PDP makes him very sad.

Speaking with PREMIUM TIMES in a telephone interview on Sunday, Odigie-Oyegun said, "It makes me sad because it is very terrible thing. It is a confirmation of the level to which our society has degenerated".

"For a man of that calibre to fall into that trap because of governorship position is disappointing. There is no problem; we wish him luck".

When asked why he was disappointed, Odigie-Oyegun said, "Don’t you see what this represents – that a man of his calibre will fall for the temptation?

"I hope you understand the point I am making. I am not sad because of the APC, but because it reflects on the condition of the Nigerian elite and the kind of things they fall for. For the APC, there is no problem. People go, people come, but for this nation, it is a very sad commentary. It makes you unhappy".

"The time has come when we should have politicians of principle. We cannot continue like this. The society is sick. We shouldn’t encourage things like this. It indicates democracy is lacking in that party.

"For a man of his calibre to say the things he has said on record and still did this, is disappointing. If he had done this six months ago that would have been understandable. But just because of nomination, you fell for it, even if it is the main election. (Buba) Marwa is there; the Speaker is there. This is rock bottom. Haba wetin! The disconnection is too direct".

When asked if the APC will attempt to woo Ribadu back, the APC National chairman simply said, "That is not the issue. If you want to get him back, you offer him what the people are offering him.

"I’m not disappointed because I’m APC or because of where he is going. But for a man of that calibre who has said things on record and yet went in this direction is disappointing", he added. 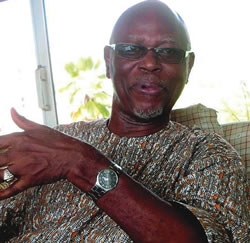