Nigeria’s Minister of Transport, Chibuike Amaechi has won the 2015 Igbo Man of the Year Award organized by the Ohanaeze Youth Council, DailyPost reports.

National Secretary of the Ohanaeze Youth Council, OYC, Mazi Okwu Nnabuike, disclosed to newmen Thursday, said “the former Governor of Rivers State from the Ikwerre sub Igbo clan won the award after a stiff poll organised by the OYC.” 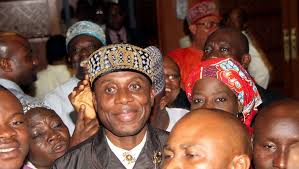 While disclosing that the award will officially be conferred on Hon Amaechi on Saturday, 30th January, 2015 at Nike Lake Hotel, Enugu, he stated that the Deputy Senate President, Chief Senator Ike Ekweremadu emerged as the outstanding Igbo politician of the year.

He said: Anaechi worth the award because of how he gallantly led the fight that led to the change in the country today as the Director of President Buhari’s campaign team. These no doubt, put him forward as a true Igbo son from the South-South.
Share:
Facebook Twitter Reddit WhatsApp Email Link
[1977]
Show hidden low quality content