According to him Jonathan was responsible for the death of thousands of Nigerians since 2009, that Boko Haram could have been eliminated since, if politicians had chosen to do so.

“This insurgency shouldn’t have lasted even for six months,” he told AFP in Abuja and recalled sectarian religious violence in the northeast state of Yobe during his time in office.

“Within weeks, we crushed it because we did not neglect military training and, of course, we did not lack the leadership and the capacity to take decisions,” he added.

Abubakar claimed His criticism of Jonathan’s government was constructive, with few visible improvements in tackling corruption, poor governance and accountability in addition to the worsening security situation.

“I told Nigerians that he (Jonathan) did not have the capacity, he didn’t have the experience. He didn’t have anything, yet they gave him the chance, the opportunity,” he added.

“And they can now see the chance and the opportunity they gave him. Of course I’m more experienced than he is. I believe my capacity cannot be compared with his, in all respect.” 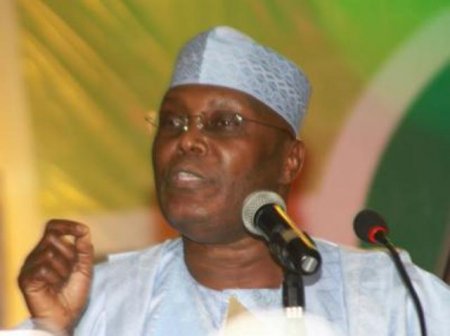 Any crisis that lasts more than 6 months in any country is been sponsored by government for political reasons.
Who will gain if no elections holds in the 3 northern state while the insurgents are almost in total control of, The government. Who will gain if there is tenure elongation as a result of the insurgency in the country, The government too. So what are we saying?
It took small Cameroon less than 48 hours to rescue the wife of there PM but the self acclaimed giant of Africa has been unable to rescue over 200 young school girls captured by the insurgents after almost 160 days and it took a young girl from Pakistan Malala to get the Gej -led government to see the parents of this kidnapped girls and you tell the FG is not in the know of what is truly happening?
we will only move forward if we tell ourselves the truth and charge the FG who has our mandate to be accountable to us and stop toiling with the lives of the masses, If not we will have a very long way to go.
Why are we attacking Atiku for saying the truth when is there for all to see but some of us has refused to see simply for the gains from the administration.
May God help us all and give us the grace to say the truth even in the hardest of time

J
Politics Atiku: No man alive has contributed more to Nigeria than Obasanjo - THE CABLE