FREE Nigerian Business Directory
✅ NEW - get your business listed and your information shared across social media.
Ad
Senate President, Bukola Saraki has advised the President Muhammadu Buhari-led Federal Government to immediately constitute a panel consisting of stakeholders to work on demands of Nigerian workers for increased wages and arrears of pension, promotion and allowances.

In a statement signed by Yusuph Olaniyonu, Special Adviser (Media and Publicity) to the Senate President, Saraki while speaking with newsmen at the Eagles Square, Abuja, venue of the May Day Celebration said if the workers had allowed the Minister of Labour and Productivity, Dr. Chris Ngige, to address them he would have announced some plans that the government had for the workers.

He said the Government needs to quickly move to address all the issues that the workers are angry about and expressed the readiness of the National Assembly to play its part in ensuring that the workers get their dues.

"Government must set up a high-powered committee representing all stakeholders who have the ability to engender confidence across board. They must be given clear terms of references and realistic time to conclude their work and make recommendations. 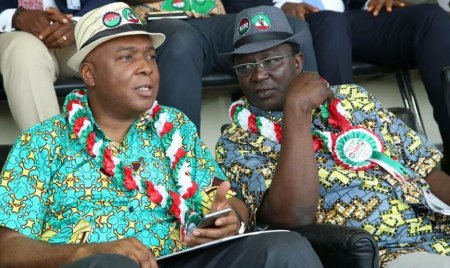 "We in the National Assembly are ready to play our part to ensure that the appropriation of necessary funds and enactment of appropriate laws to back up the resultant policies", he said.

He said the government appreciated the patience, understanding and co-operation that the workers had extended to the Administration since its inception, particularly at this period of economic challenge and that their positive attitude will not be taken for granted.

He added that the National Assembly members had on their own increased the proposed provision in the 2017 budget being worked on to take care of pension of retired workers. He also said the legislature could easily at the last stage of the budget process include provisions to take care of the financial implication of redressing arrears of promotion and allowances.

He added that the National Assembly would at all times be responsive and responsible to the yearnings of the workers and that they would always show understanding of the plight of workers.
O

Many People do not like hearing your voice
R