The discosure was made on Tuesday at the joint meeting on 2015-2017 Medium Term Expenditure Framework organised by Senate Joint Committees in Abuja.

Sen. Ahmed Makarfi, Chairman Senate Committee on Finance, who presided said the process would be concluded before a final decision was taken.

According to him, the various committees do not have any major objections on the proposed figure.

The Federal Government in the 2015-2017 Medium Term Expenditure Framework and Fiscal Strategy Paper proposed the figure for 2015. The document had reminded the Committees members on the need to take cognisance of the global supply-demand balance that was edging out the recent spikes in oil price.

According to the paper, there is increasing supply arising from exploitation of sale oil and gas and Iranian sanctions suspension leading to global surplus crude oil production capacity.

It said the import of the development was an indicator that the high oil price recorded in recent past would not be long-lived. 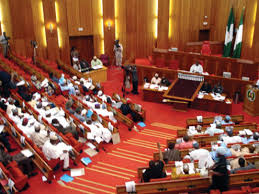