For Sale - One Bedroom Executive Flat - Lagos (NGN37m)
✅ NEW - car park, swimming pool, 24 hours light/security and more.
Ad
Senator Gbenga Obadara, Chairman Senate Committee on Privatization on Wednesday raised a false alarm that his phone was missing and that reporters present during his official visit to the Kano Electricity Distribution Company,KEDC Kano might have stolen it.

Senator Obadaro claimed that the phone was stolen at the conference hall of KEDC where he had addressed journalists. He then ordered that all journalist present for the event should be searched.

Following this, the main entrance of the conference hall was closed, to enable security agents to search all the newsmen that attended the occasion.

However, moments before the search began, the senator who had already left the venue, discovered the phone. The announcement of the discovery was made by a member of the entourage.

Senator Obadaro didn't bother returning to the venue to apologize to the embarrassed journalist.

However, the company’s Head of Corporate Communication, Alhaji Muktar Baffa, apologized to the newsmen. 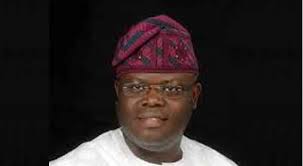