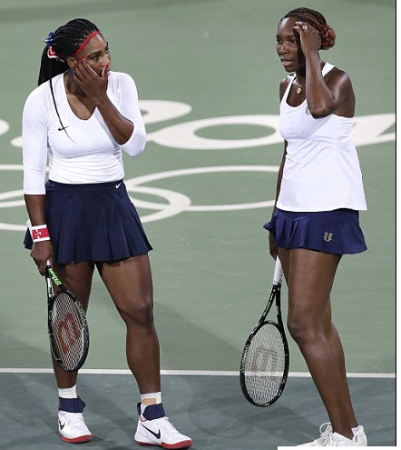 The tennis champions have won gold in the doubles matches at London 2012, Beijing's 2008 Games and at Sydney's Olympics in 2000.

They were favorites to take home their fourth gold on Sunday, when they lost in straight sets to the Czech Republic's Lucie Safarova and Barbora Strycova in 93 minutes.

It comes as yet another blow for Venus who crashed out of the women's singles Olympic tennis tournament in Rio on Saturday.

Four-time gold medalist Venus, who is ranked 6th best player in the world, lost to Belgium's Kirsten Flipkens 4-6, 6-3, 7-6 (7/5) in a three-hour center court marathon, marking her first ever opening round loss.

Serena had better luck, managing to hold on to her Olympic singles gold medal, winning with a patchy-at-times 6-4, 6-2 victory over Australia's Daria Gavrilova on Sunday.
You must log in or register to reply here.