Troops in Mubi, Adamawa on Wednesday foiled a fresh suicide attack at Gubula village in the Mdagali local government area of the state. 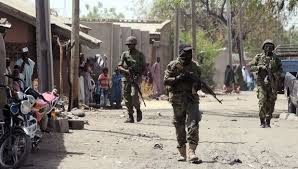 V.O. Ezeugwu, commander of the task force, confirmed that his men intercepted a middle-aged woman with an improvised explosive device.

Ezeugwu said she concealed the device in her hand bag, while heading to the market in Gubula village “to accomplish her evil mission”.

The commander revealed that after foiling the attack, the army quickly condoned off the area and discovered hidden explosive devices.

Ezeugwu appealed to residents to continue to give useful information to security operatives to aid operatives in their quest to crush the insurgents.