Soldiers Torture Lawyer Who accused them of Causing Gridlock

Curators
A Lagos-based lawyer, Olajide Sipe, is in a critical condition at a private hospital after he was tortured and shot at by some soldiers on the 7th Avenue, FESTAC Town, Lagos State. 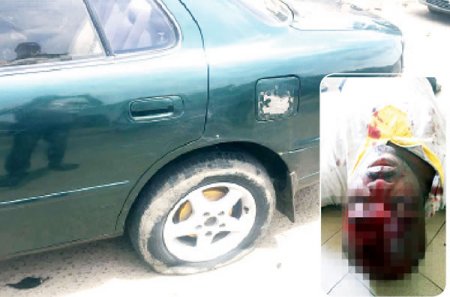 It was learnt that the officers were deployed in the community to guard the Nigerian National Petroleum Corporation pipelines.

They were, however, said to have left their duty post for the Mobil Filling Station on 23 Road to coordinate motorists queueing for fuel on Tuesday.

PUNCH Metro learnt that the victim was driving home in his Toyota Camry when he was held by a gridlock on the road.

The soldiers were reported to have stopped a bus on the road.

Olajide was said to have advised one of the officers to park the bus by the roadside to free up the gridlock they created.

As he drove off, the soldiers reportedly mounted a motorcycle and began to chase him. It was said that they shot at him, but the bullets hit the car’s back tyres.

They were said to have waylaid him on 72 Road, where they tortured him, rendering him unconscious.

Olajide narrated his ordeal to PUNCH Metro. Read more here
You must log in or register to reply here.

Aug 8, 2019
ese
E
E
Metro Pregnant woman and her five children among 7 people burnt to death by 'satanic' group who wanted them to "repent for their sins" (Photos) - LIB