The South-Eastern Part of the APC has said that it isn't against President Goodluck Jonathan running for the presidential office come 2015, saying he has the constitutional right to do so.

The All Progressives Congress (APC) South East zone, on Sunday, reiterated that it was not opposed to President Goodluck Jonathan running for presidency in 2015, as he has the constitutional right to contest.

The party was reacting to the endorsement of President Jonathan as Igbo candidate by the People’s Democratic Party (PDP) South-East political leaders, during the Transformation Ambassadors of Nigeria (TAN) rally in Awka, Anambra State on Saturday.

Notable PDP Igbo political leaders, including Chairman of the South-East Governors Forum, Governor Theodore Orji of Abia State; Chief Emmanuel Iwuanyanwu; Josephine Anenih, who represented Nigerian women in the zone; billionaire businessman, Arthur Eze; former Anambra State Governor, Peter Obi and Deputy Speaker of the House of Representatives, Emeka Ihedioha, who spoke on behalf of the South-East caucus of the National Assembly had united in asking the President to contest. 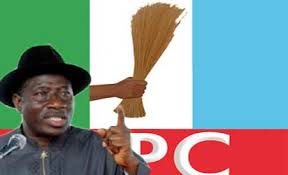