Politics Stomach Infrastructure is an Insult to Ekiti People- Fayemi

He defended his tenure, saying teachers in the state became the highest paid in the country, adding that he ensured that civil servants’ salaries were increased thrice during his administration.

He wondered why the new Governor, Ayodele Fayose, and his supporters had been criticising him saying “What they mean by stomach infrastructure abhors me and many people know that I am not going to partake in it. I am not going to go out on the streets and start distributing N200 to the people because I want people to hail me.

“I don’t subscribe to that. It is very easy for me, out of the N3bn average income that accrues to the state, to go out there, distribute N500,000 among street urchins and then everybody says, ‘what a good governor.’ But when someone throws N500, 000 to you and pockets N2bn of state funds and put it in a private account, is that what really people want?” 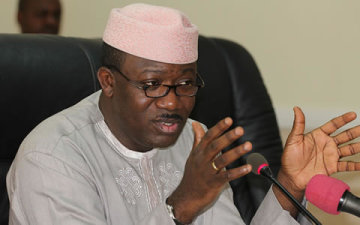