FREE Nigerian Business Directory
✅ NEW - get your business listed and your information shared across social media.
Ad
Facts have emerged on why Super Eagles coach Sunday Oliseh may continue to coach the Super Eagles from his base In Belgium.

Camp sources have said that the former Juventus players has alleged occult manipulations by his enemies against him and has vowed to flee far from the country to where they could not fly to attack him.

“He is always scared in camp and suspicious of even members of his back room staff”, a close source to the team informed. The source said that the outspoken coach allegedly confronted his staff and warned them that there were many witches and wizards who were trying to undermine the success of the Eagles. “He warned those fond of putting their hands in their pockets before shaking him to desist or keep their handshakes as he feared they touch objects concealed in their pockets before offering to shake him”, the source said. 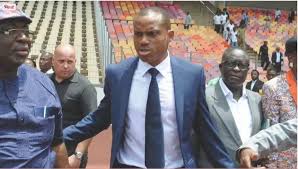 The coach also has written to the NFF to pay his outstanding N10 million accommodation fee as agreed in his contract(N5 million for 2015 and another N5 million for 2016) if they want him to reside in Nigeria as he said he would not stay in the hotels when the Super Eagles are not in camp.

But there are witches and wizards in Belgium na. The spiritual is not limited by boundaries

Paranoia, that's what this sounds like. But he should stick to prayers...
You must log in or register to reply here.