Curators
For Sale - One Bedroom Executive Flat - Lagos (NGN37m)
✅ NEW - car park, swimming pool, 24 hours light/security and more.
Ad
The founder and General Overseer of the Synagogue Church of All Nations, SCOAN, prophet T.B Joshua, has reportedly healed a man who has been having persistent erection for 5 months now after patronizing prostitutes.

According to the report, the young man, identified as Sunday went in with a prostitute after attending church with his father, earlier that day.

When he got home that evening after sleeping with the woman, his erection remained.

As he confessed in front of the church members, he could hardly stand or move, even sitting was difficult as a result of his erection.

Sunday told the church that he was forced to explain his plight to his father who took him to the doctors who could only recommend an operation.

They declined and continued making efforts to solve his excruciatingly painful problem.

Sunday Akinrinwa became housebound for five months because of the permanent erection!

His father who is a reputable man in Ondo state, brought him to SCOAN.

The whole process was shown live on Emmanuel TV.

When Prophet T.B. Joshua prayed for Sunday, his whole body began to shake.

After the prayer, Prophet T.B. Joshua told him to urinate.

The young man advised youth that they should not fornicate or commit adultery but rather commit their ways to God. 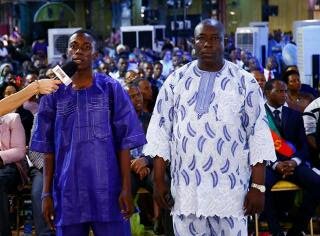 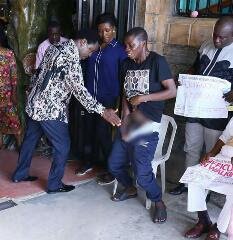 this boy you get luck...anyway it wouldnt hav been so bad if you were not healed, because you will never get lost cus your junior will serve as a compass, always pointing to the north pole of the greenwish meridian
A

The lady side that man.. See her face
T

That's the reward of fornication.. If u wan fornicate.. Fornicate with brain

Lol. He will still do more. Just give him small time to rest. His junior will still stand up again