Health authorities in Trollhattan said in a statement that one teacher died after being wounded in the attack and two students, aged 11 and 15, were seriously wounded with cuts. They said the attacker was also in serious condition. 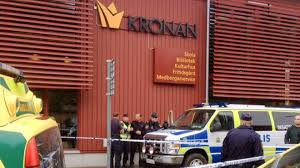 In a statement, police in Trollhattan said the attack took place in the school's cafe area.

The school has 400 students, ranging from pre-school to high school.

Swedish media say the school held a meeting Thursday morning to discuss teachers' worries that the school was too open, with a cafe for adults that meant the school could not control who comes in.

The Dagens Nyheter newspaper said students must go through the cafe to reach the school's own cafeteria and other parts of the building.

K
World Teacher Arrested For Having Sex With 3 Students [PHOTOS]