The Ultimate Sacrifice: 'Why I'll risk my Life for Ebola Patients' - MSF Worker

Cokie Van Der Velde, a foreign aid worker in West Africa treating people with Ebola, while speaking to World Update and The Why Factor on the BBC World Service revealed the passion behind her caring for the sick in Liberia.

I was first in Liberia five weeks ago and I believe the situation is now much worse. Back then, our treatment centres had already run out of room and we were starting to put people in corridors.

In the centre, people groan and cry out - the smell of blood, diarrhoea and vomit is awful - unfortunately there is also a very pervading smell of dead bodies.

I can only leave it to your imagination to understand what a pile of bodies smells like after a week in very hot, moist surroundings - it makes you feel sick quite a lot of the time.

I try to go round the patients and help where I can and give them some water. I'll change and wash patients and just try and give some physical contact to each person because nobody else will touch them, nobody else has been near them for days. They must feel very lonely and very frightened.

I don't know how much comfort I am bringing to people when I'm dressed in a mask and goggles and completely covered from head to foot. If we have children at the treatment centre, which we quite often do, I'll try to bring them some toys and have a little game with them if I can.

Depending on how many people have died, I'll then start the very unpleasant job of moving the bodies. We put people in body bags, we write the names on the body bags and we move them to the morgue.

If the relatives want to come and see the body and say goodbye, we set up a viewing and I try to make that as pleasant as I can - if that's at all possible. I'll put flowers round the body bag and if it's a child I'll put some toys around them. I'll also put the toys in the body bag with them when we seal it up.

You can't let the relatives touch the body - they are just allowed to view it and then we seal it up forever. It's a very sad moment.

I do feel fear, I can't deny that.

Last time I was in Liberia, sometimes I'd think, "I feel a bit feverish", or I'd wake up during the night and take my temperature. If I had a slight sore throat - one of the first signs of Ebola - I'd start to worry I had the virus.

There is always an element of risk when I work for MSF - I could be caught in crossfire, I could always pick up a nasty disease and there's the small chance of kidnap. And normally I would put that risk at about one in 1,000. So it's not that high. But I must admit, when I sat down and thought about it, I would say the risk for me now is about one in 10.

I've made sure that my will and my house and everything are in order so that if for some reason I don't come back at least it will be easy for my relatives to carry on. I have had my children, I've had my grandchildren and of course I still want to be part of their lives but it's not like I'm leaving small children behind. I think it's ok for me to go and risk my life and my family understands.

One of the reasons I enjoy working for MSF is the challenge. Before I started working for them, one of my passions was rock climbing. So it is probably something in my personality that makes me accept these challenges.

I go partly because of my belief that there should be social justice in the world - that there should be some sort of equality. The people I'm helping are part of the human race, part of humanity - in that respect, all people for me are the same. I feel I have as much obligation to help a stranger as I do to help someone I know.

That last time I was in Liberia I must have moved hundreds of bodies but only three people survived during the month that I was there. I don't think you can see that many bodies without viewing death in a different way.

I try to always make sure that the team I'm working with stops for a moment to say goodbye to the person before we put them in the body bag. We still try to keep a reverence for the dead. Even though I'm not religious, I hope I can bring some sort of spirituality to that moment and some respect to the grieving of the relatives.

Putting all these bodies into body bags, I sometimes can't help imagining my own body being put into one - I especially think about that in the middle of the night. It's made me think about my own death and what will happen when I die. But when you see so much death, you accept that this is really just part of life - that we live and die.

That doesn't cheapen people's lives but I think it brings home to me the reality of death, whereas in our society, or at least in my life, death is sort of ignored. It's something that happens but you keep it in the back of your mind. Now it's very much in the front of my mind and I accept that it will eventually happen, sooner or later.

I do enjoy my job, I don't think you could do what I do if you didn't enjoy your work. I can't say I particularly enjoy working with dead bodies but there's a lot of camaraderie - there's a satisfaction when you do get it right and eventually we will get this epidemic under control.

When that happens there will be great elation and the satisfaction of knowing I did a job that maybe not everyone could have done and that I played a small part in helping to overcome this. 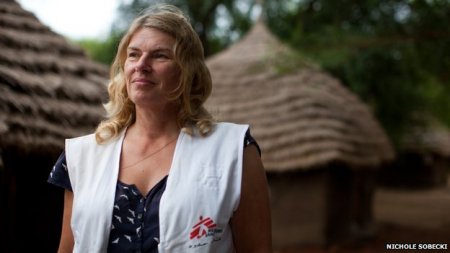