No fewer than three people have lost their lives and eight others seriously injured on Sunday after a commuter bus collided with a Toyota Corolla along the Lekki-Epe Expressway of Lagos State, Punch reports. 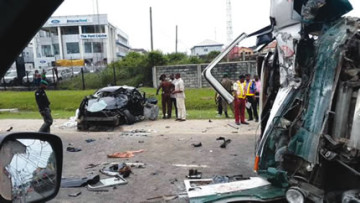 It was gathered that the incident occurred around 12pm on Sunday while the bus was heading towards Ajah. The bus which has passengers full was said to be on top speed, when its propeller broke thus causing the driver to lose control.

The vehicle reportedly skidded off the road and collided with the black Toyota Corolla, which was conveying a couple.

It was gathered that the bus conductor and two other passengers died on the spot.