Curators
FREE Nigerian Business Directory
✅ NEW - get your business listed and your information shared across social media.
Ad
Wanted ex-militant leader, Government Ekpemupolo, a.k.a.Tompolo, on Sunday made a solemn appeal from his hideout to rampaging militant group, the Niger Delta Avengers, to ceasefire, alluding that President Muhammadu Buhari-led government was ready to hold a dialogue with the group. 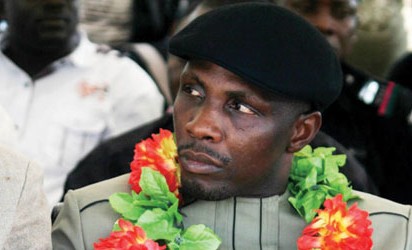 Tompolo also said last Saturday’s invasion of his home and Gbaramatu communities by the military in the name of searching for him and members of the NDA, had further proved his assertion that the Nigerian government was only interested in the Niger Delta oil.

In an appeal letter to members of the dreaded militant group, the former leader of the Movement for the Emancipation of the Niger Delta, personally signed by him, urged the group to retreat in the interest of the entire region.

Describing himself as a man of peace, Tompolo emphasised that he was neither a member nor a sponsor of the group, as some persons believed, stressing that he was only a victim of ethnic politics.

He asked the NDA to “put an end to this act of pipeline vandalism, as it will not do our dear country any good, especially in this critical period of our economic history.

“I still maintain that I know nothing about your group and the destruction of crude oil facilities in the Niger Delta region.”

The ex-MEND leader added, “And this happened in my absence as I am currently out of Gbaramatu kingdom, but what I gathered from some of the victims of the Army invasion is unspeakable. Even pots of soup were not spared. The Army has massively looted resident homes, desecrated traditional places of worship, committed sacrilege, abominations and what have you.”