For Sale - One Bedroom Executive Flat - Lagos (NGN37m)
✅ NEW - car park, swimming pool, 24 hours light/security and more.
Ad
Churchill Olakunle, estranged husband of Nollywood actress, Tonto Dikeh has reacted to allegations leveled against him by his wife during her interview with Media hub. 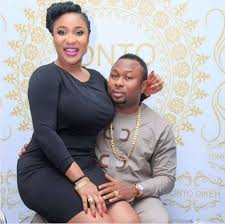 During the interview, he talked about how he met Tonto Dikeh, the abuse in the their home and other issues.

''I met her at my brother's birthday party, that was in a night club''.

He revealed that she got pregnant 6 months after they met and that triggered him to take the next step by going to her village to pay her brideprice. Olakunle also said that Tonto is not the reason he's successful as he had 4 companies before meeting her.

He also talked about how she destroyed the security system on their home fence and jumped him. On allegations of abuse, Churchill said the incident which led to the scar on her leg occurred in his mum’s house when Tonto was destroying property. He shared a video of the aftermath of the alleged incident, his mum’s voice can be heard in the background. He went on to accuse Tonto of beating his younger brother.

On Tonto’s allegations that the luxury gifts displayed were not truly purchased by Churchill, he says it is not true and that he has receipts for everything including a Rolex.

Entertainment ‘You are an extension of me, that’s why I’ll always love you’ – Olakunle Churchill declares his undying love for Rosy Meurer on her birthday– Linda