Entertainment Top 6 Celebrity Marraiges That Broke Up in Nigeria

Curators
For Sale - One Bedroom Executive Flat - Lagos (NGN37m)
✅ NEW - car park, swimming pool, 24 hours light/security and more.
Ad
They are celebrities and usually, so much pomp follows their wedding especially for those of them who roll out the drums to have an earth-shaking ceremony. And when these marriages crumble unexpectedly after a short while, it is also followed with so much scandal, noise and most people, especially those who see them as their idols, are left in wonder and amazement. Saturday Beats beams its focus on some of the marriage crashes that shocked Nigerians in recent years. 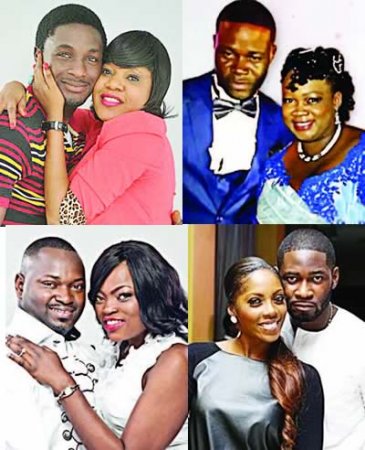 Theirs looked like a match made in heaven; at least that was the picture they painted on social media. So beautiful did their love seem that rap artiste, Ice Prince, in his song, That Could be Us, praised the couple’s love and told his potential girlfriend that their relationship could be like Tiwa and Tunji’s.

However, Nigerians got the shock of their lives about two weeks ago when Tee Billz went on his Instagram page to rant and tell tales of his wife’s alleged infidelity among other things. In retaliation, Tiwa Savage granted a no-hold-barred interview where she claimed that her husband was not only a cheat but was an irresponsible man who stole from her. Although other entertainers have pleaded with both parties to let peace reign for the sake of their son, Jamil, Tiwa has made it known that the marriage is over.

When the romance between the pair began to brew, many people were skeptical for several reasons. First on the list was the issue of age difference because Toyin is older than Adeniyi.

Some argued that it was an egocentric relationship because it was alleged that Toyin earned more money and seemed like the breadwinner of the family, so most likely she would want her decision to be final and this might not sit well with her husband.

Despite all these odds, the pair tried to prove that love is blind and they proceeded to the altar. Toyin and Adeniyi had a low key traditional wedding in Ibadan in February 2013 and on July 8, 2013, they signed the dotted lines at the Ikoyi registry.

Shortly after they tied the knot, people began to monitor the marriage just to see if their predictions would come to pass and the couple made it easy for them by posting their daily activities online for the public to comment. Sometime in 2015, their marriage had a hiccup but their parents came to the rescue to patch things up.

Later that year, it was announced that their marriage crumbled like a pack of cards. Although they did not give detailed reasons for their marriage failure, Johnson, in an interview once hinted that his marriage crashed because his wife caught him flirting.


In a recent interview, the actress disclosed that she doubts she would give marriage or love another chance.

Not many knew how the romance began but they certainly knew how it ended. The union between the two was one plagued by various controversies; top on the list was the constant war of words between Phillip’s first ex-wife, Ruth Okoro and the couple.

Despite the storm, the pair was able to sail through together for about six years before they called it quits. The separation was a messy one and some news portals reported that her bride price was returned because she was unfaithful in the marriage. It was alleged that she had an affair with a governor and that did not go down well with Phillip. It was also reported that the marriage broke up because the actress did not conceive a child and the husband’s family was breathing down her neck for a child. After a long silence on the issue, the actress via her twitter handle, insisted that she was never unfaithful to her husband. She wrote, “I asked for a divorce from my ex-husband because of irreconcilable differences. I never cheated on my husband. There’s a conscious and malicious attempt at tarnishing my image. This whole saga is familiar. Let’s not forget the past. Thank you and God bless.”

The ace actress has since moved on with her life since the marriage crashed in 2014. Although there were claims in the media that she was in a relationship with an actor, Mike Godson, she never confirmed or denied the report.

The duo signed the dotted lines to become man and wife in 2006 and by 2013 another dotted line was signed in an Abuja High Court, but this time, it was to dissolve the marriage. Shortly after the dissolution of the marriage, the actress took a picture of the court paper beaming with smiles and it soon flooded the internet.

In a series of interviews, the actress made it known that the main reason she walked out of her marriage was because she was a victim of domestic violence. The actress claimed that her husband was always beating her and she lost her pregnancy on one of the occasions.

Though she has been linked with one or two top government officials, the pretty babe is still singing and gracing the TV screens.


The marriage between ace actress Funke Akindele and Kenny Oloyede just lasted for some months, it was between May 2012 and 2013. The marriage was the talk of town mostly because her hit movie, Jenifa, had endeared her to the hearts of her fans and many were so happy that their darling Funke had left the single ladies’ club.

However, some others wagged their tongues that the marriage would pack up soon because she was not Kenny’s first wife, others were optimistic that things would work out if they gave it a shot.

Nevertheless, it still came as a rude shock when the marriage collapsed when it did! Nobody saw it coming.

It came as a shock when the actress’ camp released the statement to confirm her separation, “We want to formally inform you that after due consultation and consideration, she’s now separated from Mr. Kehinde Oloyede as his wife.”

Subsequently, Oloyede, went on his Facebook page to break the news to his followers. He wrote, “It is with a heavy heart that I am announcing the separation of me and my wife, Mrs. Olufunke Akindele, we’ve both agreed to go our separate ways because of irreconcilable difference. We still remain best of friends and we forever remain good friends. I am doing just fine, getting along without you. I don’t need you anymore in my life. You are the greatest mistake I have made in recent times.”

When asked why she quit her marriage, the actress claimed that she was a victim of domestic abuse both emotionally and verbally.

Comedienne, Princess, was on top of the world when she was getting married. She was so excited that she even reportedly said, “I am so happy I’m now getting married, I can now proudly wear iro and buba like a Nigerian woman…God bless that young man that picked me and decided to pity me and marry me when I had given up all…I am saying this because I want you all to hear it, God bless him for me for covering up my shame.”

But her marriage to Adeshola was probably the shortest among the list as it packed up almost at the beginning.


Not much is known about why the marriage broke up but Princess would always pin it down on ‘Irreconcilable differences’.

K
Entertainment Toyin Lawani releases photo of herself in sexy Muslim clothing after she was called out for sexy nun costume and told she won’t try it with Muslim..

Mar 29, 2021
Kayode Israel
K
J
Video This Week's Top Nigeria Entertainment News 6/05/2020 - Wizkid: Buhari and Trump are clueless… only difference is one can use Twitter better

Metro Bishop in rape, child marriage saga opens up says ‘I wooed her because of her beauty’ - Vanguard Nigeria News