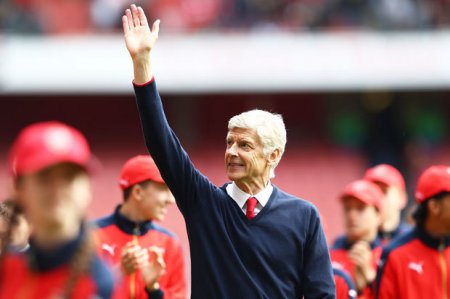 
- Arsenal are in advanced talks with Juventus boss Massimiliano Allegri about the 49-year-old succeeding Arsene Wenger as the club's manager. (Sunday Express)

- The Gunners and Manchester United are both preparing £85m bids for Atletico Madrid and France forward Antoine Griezmann, 25. (Mail on Sunday)

- Should they lose Griezmann, Atletico are ready to move for Arsenal's Alexis Sanchez, 28, and are prepared to pay the Chilean forward £220,000 a week. (Sun on Sunday)

- Liverpool midfielder Adam Lallana, 28, who has been linked with Paris St-Germain and Tottenham, has agreed a new four-year deal worth £120,000 a week. (Sunday Express)

- But the Reds are set to sell Daniel Sturridge in the summer after manager Jurgen Klopp lost patience with the 27-year-old striker's injury record. (Sunday Mirror)

- Liverpool are determined to sign Roma midfielder Leandro Paredes, 22, and are set to make a £22.5m bid with an extra £4m in bonuses. (Sun on Sunday)

- Leicester are expected to increase their efforts to sign Middlesbrough forward Gaston Ramirez having already had an offer of £12m for the 26-year-old turned down. (Mail on Sunday)

- The Foxes have rejected a £38m bid from Tianjin Quanjian for striker Islam Slimani, 28. (Sky Sports)

- Swansea are in talks with Benfica over a loan deal for defender Lisandro Ezequiel Lopez, 27. (ESPN)

- Hull and Swansea are considering moving for former West Ham midfielder Diego Poyet. The 21-year-old is a free agent after his contract with the Hammers was cancelled by mutual consent on transfer deadline day last summer. (ESPN)