The group, known as the Autozik Group, was made up of six males and a female including Callistus Ezeigwe, Victor Obinani, Ifeanyi Ezeanolue, Ogbu Ikenna, Fidelis Ominigbo, Nnamdi Nwobodo and Chinaza Okoro, was supervised by the then Head of Mechanical Engineering Department, Dr. C.H. Achebe.

“We made the mini bus using mere hand tools. This means we did all of the constructions and folding, with our hands, since the university could not provide us with ground equipment, as used in most automobile companies,” said Ezeugwu in an interview with Vanguard. 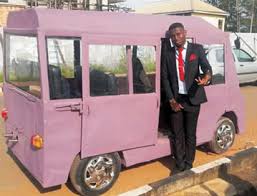 The mini bus which took about five months to complete, has a beautiful finishing so that people find it difficult to believe it was made in Nigeria. 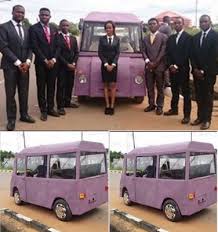 The students appealed to the government to invest in these youths and channel resources to the Automobile sector as they seek to diversify the economy. They also appealed to the public to buy made in Nigeria products to grow the Naira

A
Metro Ambode and the Street Traders of Lagos -Reuben Abati