For Sale - One Bedroom Executive Flat - Lagos (NGN37m)
✅ NEW - car park, swimming pool, 24 hours light/security and more.
Ad
Donald Trump triumphed in the Nevada caucuses on Tuesday, in a resounding win that cemented his position as the Republican presidential frontrunner with a lead that could soon be insurmountable.

The billionaire reality TV star has now won three of the four early nominating states, after other convincing wins in South Carolina and New Hampshire. 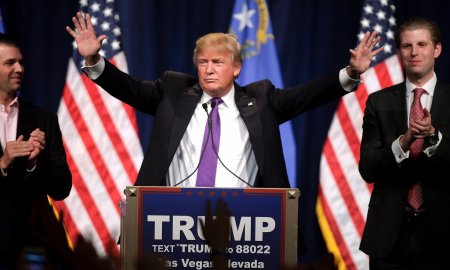 The Nevada result was called at 9:02pm local time by the Associated Press. By 10pm, with around one in five precincts reporting, Trump had a remarkable 44.6% of the vote.

Marco Rubio and Ted Cruz, the two senators best-placed to challenge Trump, were still battling it out for second place, with both candidates hovering above 20%.

Sep 24, 2016
abujagirl
A
A
World US Election: Trump Complains of Irregularities, Files Lawsuit in Nevada

Nov 8, 2016
abujagirl
A
M
Politics US Government speaks on calling Buhari “lifeless”, what it expects in 2019 election - Daily Post Nigeria