US networks including Fox News and NBC called the race for the two underdogs within half an hour of polls closing in the Midwestern state that borders Canada.

With seven percent of precincts reporting, Cruz, a conservative senator from Texas, was ahead with 49 percent of the vote compared to 35 percent for billionaire Trump. 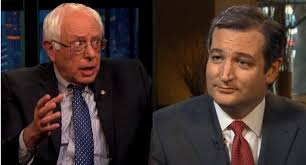 Cruz’s win in the Badger State is a serious blow to Trump and could alter the trajectory of the Republican race.

On the Democratic side, Vermont Senator Sanders led with 57 percent versus 43 percent for Clinton.

But the former secretary of state can look forward with some confidence to the upcoming races.

P
World Trump Is Delusional, He Lies All The Time – Bernie Sanders