Former Fifa president Sepp Blatter has been accused by Hope Solo, the USA women's' football team goalkeeper, of having sexually assaulted her at Fifa's Ballon d'Or award ceremony in January 2013.

The goalkeeper presented the award for Fifa women's' player of the year that year in front of an audience alongside Blatter to her teammate Abby Wambach after the USA won gold at the Olympics in London in 2012.

The 36-year-old said "i had Sepp Blatter grab my ass" at the award ceremony, however Blatter, via a spokesman, denied the claims, calling them "ridiculous". 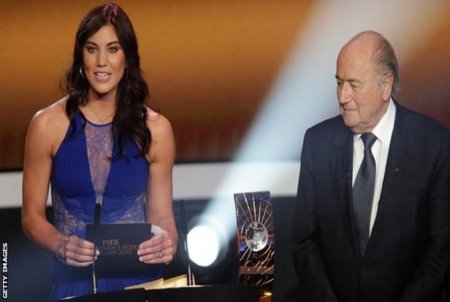 In an interview with Portuguese daily paper Expresso, Solo claimed that sexual assault had happened minutes before they went on stage to present the award.

“I had Sepp Blatter grab my ass. It was at the Ballon d’Or, right before I went on stage. [Sexual harassment] has been normalized.

“For years, in the past, female players date and end up marrying their college coaches, which obviously a coach should not be doing, especially with a young player.

“I’m actually very disappointed with the women who haven’t spoken about it in the sports world … I wish more women, especially in football, would speak against it, about the experiences, because some of those people still work [in football],” said Solo

When asked why she had never brought it up previously, Solo admitted it is because she usually likes to take it up with the person directly, rather than flush it out to the press.


“I speak out directly [with people] when things like that happen. In other cases, for instance, I’ve told my teammates: ‘Don’t ever f***ing touch me! Don’t do it’. It has been in the showers, it’s been in the locker room… I usually speak directly to the person.

“In the case of Sepp Blatter, I went on the stage, I was nervous about the presentation… It was the Ballon d’Or I was presenting.

“After that, I didn’t see him, and that was kind of bad. I didn’t get to tell him directly ‘Don’t ever touch me!’ That’s the way I’ve always handled things. Directly.” the USA goalkeeper added