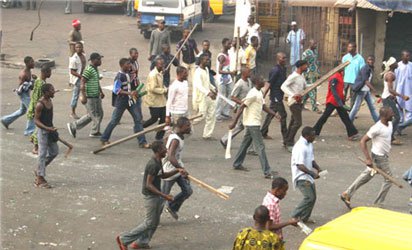 The ultimatum is based on the recent attacks by the Ogbe-Ijoh and Isaba communities where some persons were killed with others still being held hostage.

Chairman of Ighele-Urhobo in Udu, Comrade Sunday Subi handed down the ultimatum to the Ijaws on behalf of Urhobo youths at Aladja when the President General Of Urhobo Progress Union, UPU WorldWide stormed Aladja community for on-the-spot assessment of the troubled Aladja Community.

Comrade Subi reiterated that the brewing communal war between Aladja and Isaba /Ogbe-Ijoh communities concerns even Udu and the entire Urhobo nation.

He warned that within the fourteen-day ultimatum, the Ijaws should release all kidnapped Urhobo indigenes just as he called on Urhobo sons and daughters in Ijawland to return back home.

In his words, “Urhobo and Udu are ready to fight for Aladja. Pass this message to Aladja people. Okowa act now or Udu shall act. We give all Ijaws within Udu land 14 days to leave our land. The youths will go round announcing that soon. Ijaws must release those kidnapped and Urhobos in Ijaw land should come back home.”

Comrade Subi stated that the call became necessary with the “unending killings and kidnappings of Urhobo people by the Ijaws.”

He noted that the Ijaws were planning to conquer Urhobo land especially Aladja community, stressing that, “The Urhobos will not tolerate that anymore.”