President Muhammadu Buhari rode to victory in May on a promise to revive the country’s moribund economy, vanquish Boko Haram terrorists who controlled much of the northeastern part of the country and tackle the pervasive corruption that has stifled development in Africa’s most populous nation.

Five months later there is growing disenchantment that the president has not delivered on his lofty promises, while taking an unprecedented amount of time just getting his government staffed.

“I think he’s too slow,” said Innocent Lagi, a Buhari ally and former attorney general of Nasarawa State in central Nigeria. “He must have underestimated the problems of the country.”

Six months into office, Mr. Buhari had installed just half of the Cabinet and top-level appointments under his discretion, slowing the former army general’s ability to capitalize on his postelection honeymoon. Recently the Nigerian Senate approved the last of his Cabinet picks, but only after the president admitted he hasn’t figured out exactly which portfolios his new ministers will be given.

Mr. Buhari has complained that the country was “materially and morally vandalized” before he took power, but critics say that his slow start is undercutting the momentum to overhaul the government and economy in Nigeria, which Transparency International ranked as 136th — tied with Russia — among 176 countries in its Corruption Perceptions Index.

“The change was only in the new leadership,” said Mr. Lagi. “The courts, legislature and other institutions like the army, police, etc., have not changed. The president has no powers to fight corruption; the institutions do. He can’t take a corrupt person to court. He can’t arrest a corrupt person. The reality is that the country hasn’t moved forward.” 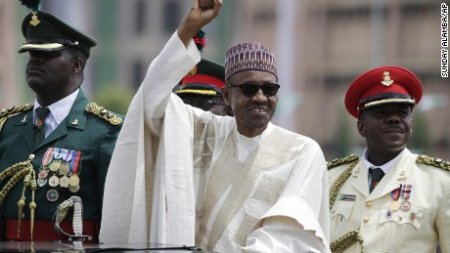 The Guardian editorialized recently that, “instead of whining and seemingly ruing why he chose to lead at this time, the president should consider the dire situation of the economy as an opportunity to demonstrate that Nigerians did not make a mistake by giving him the job he sought for 12 years.”

The paper continued, “All the citizens want is for him to translate his plethora of sweet promises into policies and programs that would improve their lot. All that Nigerians need now is his performance and not excuses.”

Inaction at the top levels of government has mirrored economic gridlock throughout the country.

Hajiya Hafsat Musa, who runs a small clothing shop in Mararaba, a suburb of the capital of Abuja, said she has been losing money for months because the government has been slow in issuing paychecks. Most of her customers are civil servants, she said.

“My customers no longer patronize me,” said Ms. Musa. “Some of them have not been paid for months. The way the economy runs, if there are no ministers, everything is grounded.”

Her experience is common throughout Nigeria, an oil-rich country that has long failed to live up to its full economic potential. In April, a month before Mr. Buhari took office, unemployment in Nigeria was 7.5 percent. In July, for which the most recent statistics are available, the jobless rate was 8.2 percent, according to government figures.

The Nigerian Labor Congress, the 4 million-member umbrella group for the country’s trade unions, recently reported that about 60,000 Nigerians have lost their jobs in recent months because of a drop in government spending on infrastructure. “It has become critical. We are still lacking answers,” said Congress President Amechi Asugwuni. “We have not seen the plan for infrastructure.”

Mr. Buhari’s defenders said the president is doing the best he can to change patterns that have beset the country for years. Spokesman Alhaji Lai Mohammed of the president’s political party, the All Progressives Congress, noted that Mr. Buhari was the first Nigerian politician to unseat an incumbent president and take over the reins of government in a peaceful transition. Change isn’t easy, he said.

“He’s not slow,” said Mr. Mohammed. “The government is focused; it is methodological. People will say this government does not have ministers, but we are saying this government wants people with proven track records of competence and integrity.”

Mr. Buhari, who headed the country for two years in the mid-1980s after a military coup, defeated incumbent Goodluck Jonathan in a March vote that won praise from the Obama administration and international election officials. Mr. Jonathan became the country’s first sitting president to cede power peacefully, declaring, “Nobody’s ambition is worth the blood of any Nigerian.”

Tough slog
But it has been a tough slog for the winner since, and when Mr. Buhari has taken decisive action, he has stirred controversy.

The banking sector has shed jobs, for example, because the president ordered government ministries to consolidate their accounts in the Central Bank of Nigeria to curb overly complicated public finances exploited by corrupt bureaucrats.

Analysts said the move — technically called a “treasury single account” policy — was a major step in cracking down on unscrupulous public servants and their friends in the private financial sector.

“TSA is a masterstroke policy of the current government, and the ingenuity behind it must be widely applauded,” said Olusola Adegbite, a law professor at Obafemi Awolowo University. “It is the most potent anti-corruption weapon that would not only cut loose all the fingers of corruption in government, but is also an ingenious policy that will fumigate the banking sector that continues to reek of filth and rot.”

Despite those measures, even Mr. Buhari’s formerly stalwart supporters say the president’s record hasn’t lived up to his rhetoric on cracking down on graft.

“Inasmuch as I want to commend President Buhari on the fight against corruption, I think that the crusade is rather very slow,” said Alex Kwapnoe, an All Progressives Congress member who helped coordinate the president’s political campaign in Plateau State in north-central Nigeria.

“There are a lot of these corrupt former officials left free, and the institutions of the state have the capacity to bring all of them to book,” Mr. Kwapnoe said. “Unless we do that, we will be paying lip service by leaving other persons who were involved in corrupt activities.”

At the Federal Medical Center in Keffi, about an hour’s drive east of Abuja, for example, hospital managers have repeatedly complained that doctors send patients to their private clinics to capture the hospital’s business. The same doctors drive expensive cars and live in big houses despite their modest salaries.

“It’s pretty obvious they are diverting hospital funds into their pockets,” said a member of the Association of Resident Doctors, who asked to remain anonymous out of fear of retribution. “We want Buhari to beam his searchlight into the financial activities of the Federal Medical Center.”

Mr. Buhari’s progress against the brutal Boko Haram movement also has been mixed. In the months after they garnered headlines by kidnapping 276 schoolgirls last year, the Islamic extremists ran rampant across northeastern Nigeria, eluding capture and defeating Nigerian forces in skirmishes. Their boldness was a key factor in Mr. Buhari’s victory over Mr. Jonathan.

With his military background, Mr. Buhari has reorganized the army, created safe havens for the more than 2 million Nigerians displaced in the fighting and orchestrated offensives alongside Cameroonian and Chadian troops that have set the terrorists back on their heels.

But Boko Haram fighters are still active. Few believe the president will make good on his pledge to bring an end to the Boko Haram insurgency by the end of the year.

Yakubu Gowon, a former military head of state, told reporters that he believed the Nigerian military eventually would defeat the terrorist group but that the president’s year-end deadline was a mistake.

“I can tell you this: Nobody can really talk about when any particular operation is going to end,” he told a group of Nigerian reporters. “Yes, you can say you target a particular time, but it may finish before that time or it may go slightly beyond. To end it, that is the most important thing.”

Recently, top military officials cited stormy weather and other difficulties in sending forces to remote areas for delaying the progress of their offensive.

To Daniel Abutu, a bus driver in Abuja, the military’s excuses were emblematic of Mr. Buhari’s overall performance.

“How can the military say weather is impeding the fight?” asked Mr. Abutu. “Is it because they have realized it’s no longer feasible for them to deliver as promised?”

Buhari is slow or rather everything seems to be slow, because he is alone, the fact that everything is moving in a slow pace, is because most of those who actually helped with the campaign and whatever still know that if they should be found wanting in some shady deal that surfaces, even if of courses that deal was from their past, Buhari will drop them like a bad attitude.
So, if someone of Buhari’s character found himself in the midst of people who were brought up in corruption, schooled, employed and fed on corruption, I think slow isn't gonna cut it, because with them there is an angle to every thing they do.
Last edited by a moderator: Nov 10, 2015
Show hidden low quality content