Politics We Regret Working For You: Group Dumps Rochas Ahead of 2015

For Sale - One Bedroom Executive Flat - Lagos (NGN37m)
✅ NEW - car park, swimming pool, 24 hours light/security and more.
Ad
Ahead of the 2015 polls, Friends Club Association of Nigeria (FCAN) one of the pressure groups which claimed to have worked for the election of the Imo State Governor, Owelle Rochas Okorocha in 2011, has withdrawn its support for the governor. The group said it regretted working for Gov Okorocha on the grounds that he has allegedly abandoned the vision of the administration.

National President of FCAN, Onos Ogbovoh who disclosed this when he led members of the association on a courtesy visit to Senator Chris Anyanwu representing Imo East Senatorial District in the National Assemly yesterday insisting that the group ‘fought’ for the emergence of Governor Okorocha.

Describing Senator Anyanwu as one of the most vibrant senators in the Seventh Senate, Ogbovoh said having toured most of her projects independently, and without her knowledge, he was optimistic that she would emerged as the first female governor in the country. 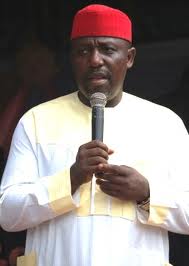 Politics ‘Oshiomhole Playing The Politics of 2023 In 2019’ — Okorocha – Naijaloaded