Movement for the Actualization of the Sovereign State of Biafra, MASSOB, has said that it will vehemently resist any attempt or plan by the Buhari-led Federal Government to re-arrest Nnamdi Kanu. 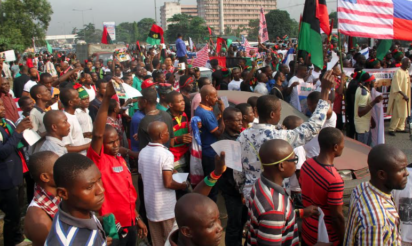 In a statement issued in Abakaliki,Ebonyi State, leader of MASSOB, Mazi Uchenna Madu, described any action in that direction as an insult and embarrassment to the inalienable rights of Ndigbo, adding that MASSOB will never relent until the struggle for the emancipation of Ndigbo and Biafra Republic is realised.

The statement reads: “MASSOB warned that any attempts or plan to re arrest Mazi Nnamdi Kanu will be thoroughly and massively resisted. We can never tolerate it. It is an insult and embarrassment to our inalienable rights. Now that we know that our consistency and exposure of the hidden truths is dangerously frustrating, disorganising and killing the age-long Hausa Fulani agenda against the people of Biafra, we shall never relent or surrender".

“The leadership of MASSOB have lambasted the Nigeria Federal Government through her Minister of Interior, Abdulrahman Dambazzu, who declared the intent of the Buhari led government to re-arrest the Biafra leader, Mazi Nnamdi Kanu whose non violence activities towards Biafra actualization and restoration have never breached, truncated or confronted the fragile and inconsistent constitution of the federation called Nigeria".

“Dambazzu, defended his Hausa Fulani youths of Arewa that threatened the people of Biafra with an ultimatum of quit notice to vacate Arewa land before October 1, 2017 that the coalition of the Arewa Youths were misquoted by the media. These cowards that depended on the middle Beltans for war against Biafrans issued the quit notice which was on video and very clear. Now, the biased Minister of Interior under the Fulani-led Federal Government is trying to subject and subvert the naked truth of the threat by his brothers that they were quoted out of context.

“They are denying a statement they made on video. They lie without qualms, as if we all are blind. The rest ethnic nationalities in Nigeria are now wiser and mature in regional progressive thought. MASSOB wants them to know that their tablet of divide and rule syndrom
Share:
Facebook Twitter Reddit WhatsApp Email Link
[1091]
Show hidden low quality content