Curators
For Sale - One Bedroom Executive Flat - Lagos (NGN37m)
✅ NEW - car park, swimming pool, 24 hours light/security and more.
Ad
Manager of Arsenal Arsene Wenger has revealed part of the reasons why Alex Iwobi lost his spot in the Arsenal team, following his none involvement in their last three games. 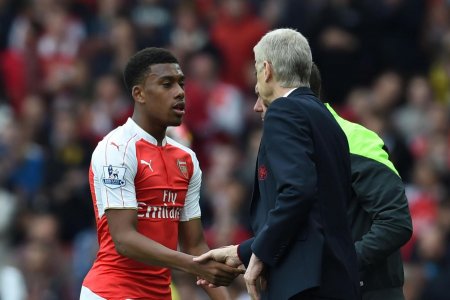 Iwobi’s Uncle Austin Okocha has suggested that the return of senior players played a role in Iwobi’s relegation to the bench, insisting that the 20 year old will get better in the nearest future.

However Arsene Wenger while speaking after his side 2-1 win over Manchester City in the semi-final, narrowed Iwobi’s exclusion alongside some other stars in the team to the new system the team is playing.

Reacting to his decision to stick with the 3-5-2 formation, the manager expressed his happiness with the system but also feels sorry for players like Iwobi, Theo Walcott and others who lost their spot due to the system.

He however suggested that the team will from time to time change their tactical formation based on the opponents they are facing before the season comes to an end.
R

If the formation works keep to it