Governors of Nigeria’s southeast zone on Sunday met in Enugu with a fresh call for zonal socio-economic integration, resolving to map out strategies especially in energy sector for greater economic activities in Igboland.

Here are what they discussed:

Igbo governors invited former Minister for Power, Professor Barth Nnaji,‎ to their Enugu meeting with a view to finding out how the zone could harness geometric power plant in Abia State to boost power supply in the entire southeast zone.

Apart from their talks with the ex-minister, who is the Chief Executive Officer (CEO) of Geometrics Power Limited, the governors also disclosed that they will soon meet with the Enugu Electricity Distribution Company (EEDC) to ascertain its challenges and know how power distribution could be improved in the area. 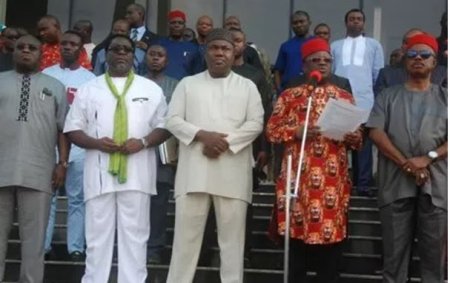 Chairman of the Southeast ‎Governors’ Forum, Chief David Umahi of Ebonyi State, also said that they were consulting the Bank of Agriculture, (BoA) for benefits derivable from the bank, stressing that BoA is not happy that there is no much fund to be harnessed from the financial institution.

According to Umahi, it would be good if the anchor borrowers will come from the Central ‎Bank of Nigeria(CBN).

Umahi said that the South East Economic integration agenda‎ is on course, noting, “when it’s effort at improving power supply is achieved, it will help spur it’s railway, cement production and other economic and industrial programs the zone is articulating in unism”

The governors also said they would interface with the Southeast Economic Corporation and the UK Department for International Development (DFID) for collaborations and corporations.

Politics We have no land for Ruga, South East governors insist – The Guardian Nigeria News