Politics When I Met Tinubu, I Ran Errands For Him - Fashola

From the interview, Fashola said, “I met Tinubu when he was the Treasurer of Mobil in 1990 or 1991. Tinubu's office was at the Bookshop House at CMS on Odunlami Street. I didn’t directly meet him. I had seen him at parties, but we never met. At that time, I was a senior associate at the law firm of Sofunde, Osakwe, Ogundipe and Belgore, where I was practising. Wale Tinubu, his nephew, came to join the law firm, then. He was always mentioning “Uncle Bola”, and one day, he said: ‘’let’s go and see my uncle.” We got there and went out to lunch with him. That was then I could say we formally met. 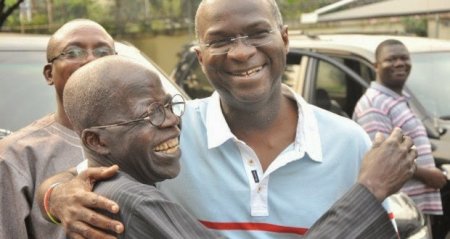 From then on, he would consult us on legal issues and we would help and give him advice. Sometimes, he would just come and say. “See we have this issue, what do you lawyers think?” We ran around and he would always give us pocket money. I think one thing that left some impressions on me was his commitment to his staff and that was symbolised by what I witnessed on a particular day after the Sallah celebration.

He brought Sallah meat to the office and supervised its sharing from floor to floor. As exalted as his office was, he was concerned to ensure that those who could not come to his house, even to the lowest driver, got part of the Sallah meat. I recalled that after the sharing of the meat, he sent someone to aggregate how much it would cost to buy soft drink for everybody and equally distributed money to them.

The incident left an impression on me and what became a practice when I started observing the killing of rams for Sallah. For me, it speaks of his concern about those working for him.


Read more on the Interview on PM News or get a copy of the book at TheNews head office, Ikeja

Feb 11, 2021
ese
E
J
Video Tinubu: Why would I deploy soldiers at tollgate and fail to protect TVC, The Nation? | Nigeria News Links