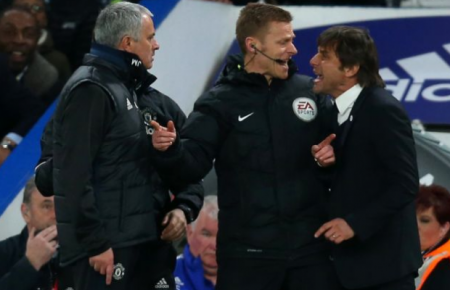 During the Monday clash, Conte reacted angrily after one of a number of fouls on Eden Hazard in the first half, and there appeared to be a clash on the sideline between the two gaffers.

But the Portuguese Manager has insisted that they did not shake hands because he was prioritizing his players immediately after the game.

“If I see him here I will shake it. I didn’t because I thought my players deserved my action immediately and our supporters also deserved our thanks to them, so it was that.

“I can promise you that if I see him out there I will shake his hand. I have nothing to speak with him at all, but to shake his hand, for sure I will do that”, he said.

The former Real Madrid boss was also asked about the sections of fans who called him Judas during the game, and he said, “They can call what they want, I am professional and I defend my club.

E
Sports EPL: I insulted Conte to hurt him – Mourinho –