FREE Nigerian Business Directory
✅ NEW - get your business listed and your information shared across social media.
Ad
Nigeria's Senate President, Bukola Saraki has stated that he has no personal grouse with the press carrying out their functions, especially as it relates to the reduction in the number of media houses covering Senate plenary.

Saraki pointed out that not all camera-carrying journalists are the real journalists, and noted that the security situation in the country makes it imperative for the Senate to take the decision.

Special Adviser to the Senate President on Media and Public Affairs, Mr. Yusuph Olaniyonu, in a telephone interview with The Punch, said the Senate, and the National Assembly by extension, had nothing against the press. 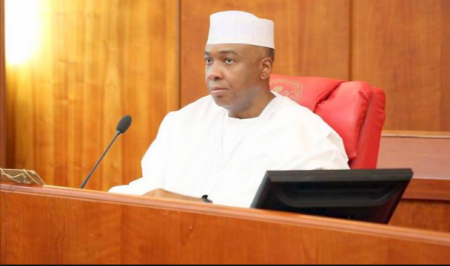 He said the chamber’s gallery was still open to journalists and members of the public to observe proceedings.

It was reported yesterday, Thursday that the Senate restricted coverage of its proceedings to six television stations to six TV stations that include: the Africa Independent Television, Nigerian Television Authority, Channels Television, Silverbird Television, Television Continental and the in-house New Age. This forced all the cameramen to boycott coverage of the plenary at the chamber.

However, the Senate Press Corps had protested against the restriction and filed a petition to the Chairman, Senate Committee on Media and Public Affairs, Senator Sabi Abdullahi.

Olaniyonu, however, said the restriction was only for “physical entry” of persons into the chamber. He said plenaries were usually broadcast at the Press Centre and proceedings could be monitored on television.

He said, “We must restrict physical access into the chamber. It is not everybody who carries a camera and claims to be a journalist that should be allowed in the chamber. If you look at the new list of approved media houses critically, you will see that all sides have been considered – both government, pro-government, opposition stations are there.

Wetin be my own sef

The journalists that were restricted have been covering the senate plenaries before. Now, what on earth could make him think that they are security threats to them?