Curators
FREE Nigerian Business Directory
✅ NEW - get your business listed and your information shared across social media.
Ad
The Economic and Financial Crimes Commission, EFCC has explained why it moved the location of former Aviation Minister and spokesman of ex-President, Goodluck Jonathan campaign organisation, Femi Fani-Kayode, from Abuja to Lagos. 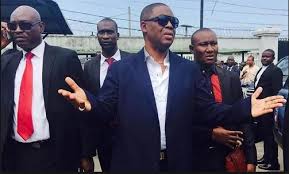 Fani Kayode was arrested by the anti-graft agency in Abuja, but later transferred to Lagos, where EFCC obtained a court warrant to remand him in custody for three weeks.

The commission said the movement was informed by his involvement in fresh cases, which require thorough investigation by its Lagos office.

A lawyer with the EFCC, Salisu Majidadi said this while responding to a fundamental rights enforcement suit filed before a High Court of the Federal Capital Territory, FCT, Apo, Abuja.

Majidadi disclosed that apart from the N800million payment allegedly made to Fani-Kayode by the Office of the National Security Adviser, ONSA, for which he was earlier arrested in Abuja, there were new cases involving him in Lagos.

Metro EFCC vs Fani-Kayode: What happened in court on Friday – Daily Post Nigeria