The Rivers state chapter of the All Progressives Congress, APC said Chief Nyesom Wike, Minister of State for Education is a liar and his claim that six commissioners in the state were going to defect to the Peoples Democratic Party, PDP was false; DAILY INDEPENDENT reported.

The APC also said that Wike will soon be expelled from the PDP to make room for Patience Jonathan's candidate.

Dr. Davies Ibiamu Ikanya, Rivers APC in a statement issued in Port Harcourt said, "This is nothing but idle talk and it exposes Wike as a shameless liar, because no commissioner in the Rt. Hon. Chibuike Rotimi Amaechi administration is contemplating defecting to the virtually non-existent PDP, not to talk of six of them leaving in one fell swoop for a party that is on its way to the graveyard in Rivers State".

"If Wike was a serious mind person, he would have mentioned the names of the six imaginary commissioners that allegedly gave him advance notice of their purported intention to dump APC for the embattled PDP".

Ibiamu also said, "Wike's expectation is a malaria dream and mere wishful thinking, as none of our commissioners in the present state executive council is either contemplating or planning such a suicidal step of joining PDP that will soon implode.”

"To the contrary, several of the characters parading themselves as governorship aspirants on the dying PDP platform have entered into serious negotiations with our party leadership with a view to joining APC, as the undisputable PDP leader in Rivers State, Her Excellency, Dame Patience Jonathan, has refused to anoint any of them. In this regard, it is unfortunate that Chief Wike seems not to be in the picture, that he will in the next few weeks be expelled from PDP for anti-party activities to pave the way for the First Lady’s anointed candidate". 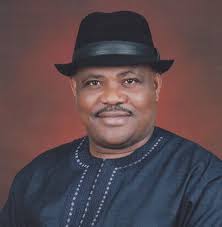