Sports Win over Korea will boost our morale - Dedevbo 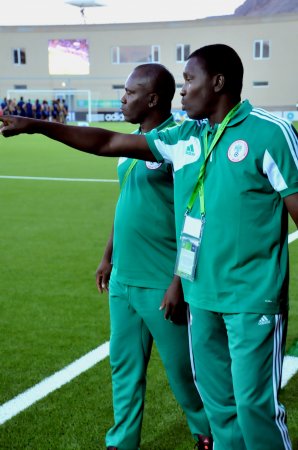 Peter Dedevbo,coach of Nigeria's Falconets has described their victory over South Korea as "very important" for the team.

The Falconets defeated Korea Republic 2-1 in their second group game at the ongoing FIFA under 20 Women's World Cup in Canada, moving tops in group C on four points.

Dedevbo said that the win will help the "confidence of his team" as they prepare for their last group game against England.

"We are happy with the victory. Before the match I explained to my girls the kind of football that Korea plays, the 'tiki taka' and that we couldn't play like that. We needed to be fast, and that's the way we played.

"After the draw against Mexico I was a little bit disappointed, but it was just the first match. When Korea scored I was not worried, because I know the level of fitness of my players, so I was always confident. This win is very important because it will give a lot of confidence to this team," Dedevbo said to FIFA.com
Last edited by a moderator: Aug 10, 2014