Curators
FREE Nigerian Business Directory
✅ NEW - get your business listed and your information shared across social media.
Ad
Second-tier Wolverhampton Wanderers ensured Liverpool’s season went from bad to worse as they knocked the seven-times winners out of the FA Cup with a 2-1 win at Anfield on Saturday. 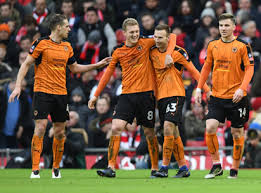 Defeat meant Liverpool, 10 points behind Premier League leaders Chelsea, had been knocked out of two cup competitions in a matter of four days following their 2-0 aggregate loss to Southampton in the semi-finals of the League Cup on Wednesday.

Wolves’s Richard Stearman stunned the home crowd by putting the visitors 1-0 up inside the first minute when he headed in a free-kick.

And four minutes before half-time, Wolves doubled their lead when Andreas Weimann finished off an excellent counter-attack move.

But, having rarely threatened, Liverpool pulled a goal back when Divock Origi scored from close range with four minutes left following a corner.

Nevertheless Wolves, who beat another Premier League side in Stoke in the third round, hung on to secure victory.

Sports Liverpool Dumped Out Of FA Cup By Wolves – 360Nobs.com