A woman, identified as Esther Williams, has been arrested by the Isheri division of the Lagos State Police Command for pouring hot water on her neighbour, Mabel Enwongomfon–Umoh, who is a nursing mother, PUNCH Metro reports.

Williams, who is said to be in her late 30s, was said to have emptied a bucket of hot water on Mabel after they had a minor argument in their rented house on Thursday, December 24, 2015, around 8pm 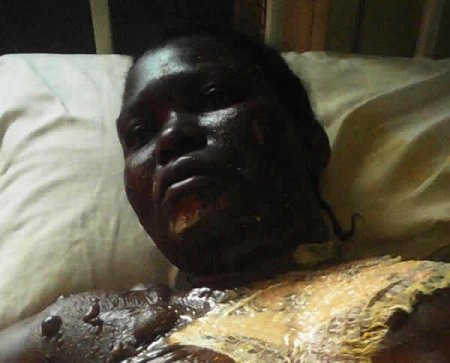 The incident left Mabel, who was still breastfeeding her two-month-old baby, with severe burns on many parts of her body, including her two breasts and abdomen.

PUNCH also gathered that the woman had not been able to breastfeed her baby since the incident happened.

The husband of the victim, who identified himself simply as Umoh, told PUNCH Metro that Williams attempted to escape after assaulting his wife, but he was able to apprehend and hand her over to the police.