Students of the Yaba College of Technology, Lagos are protesting the death of one of their colleagues.

According to Orange Blog, sources at the institution confirmed that that a female final year student, who is said to be from the department of Food Technology, was admitted at the institution’s medical centre but was not properly attended to, a situation which led to her demise this morning. 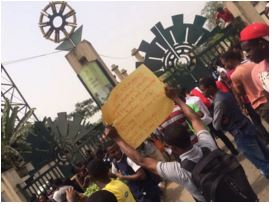 Metro FUTA students who ganged up to beat a 100 level female student have been identified and arrested, see their photos (videos) – Linda Ikeji’s Blog