Curators
For Sale - One Bedroom Executive Flat - Lagos (NGN37m)
✅ NEW - car park, swimming pool, 24 hours light/security and more.
Ad
At least, four persons have been reportedly killed in a clash that erupted between the residents of Yakira community in the Baruten Local Government Area of Kwara State and suspected herdsmen. 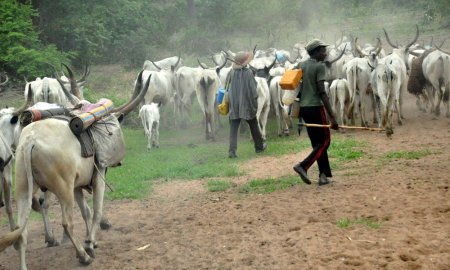 It was alleged that the community killed three herders in retaliation to the killing of an indigene.

The man, whose corpse was found in his farm, had earlier reportedly complained of incessant grazing of cattle on his farm.

It was gathered that when the farmer confronted the herdsmen in his farm, they pounced on him, slaughtered him and dumped his body in the farm.

Some angry youths in the area mobilized themselves and traced the herders to the bush and reportedly killed three of them.

Alhaji Musa Buge, the Chairman of the Transitional Implementation Committee for the council, who confirmed the killings to newsmen yesterday, said efforts were ongoing to settle the fued between the visitors and the host community.

Spokesman of Kwara State Police Command, Ajayi Okasanmi, who also confirmed the killings, said he was not sure of the number of casualty at the moment.