Curators
FREE Nigerian Business Directory
✅ NEW - get your business listed and your information shared across social media.
Ad
Blasphemous comments about Prophet Mohammed on the social media has led to the outbreak of religious violence in Pandogari, Rafi local government area of Niger state, leading to the death of four. 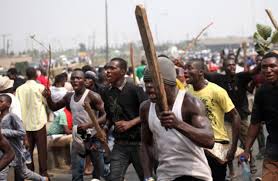 The violence started when one Mr. Methodus Chimaije Emmanuel, a 24 year old trader based in Pandogari, Rafi LGA of Niger State was attacked and killed by a mob in the town on allegation of posting a blasphemous statement about Prophet Muhammad on the social media.

The violence has led to the imposition of a dusk to dawn curfew in the town by the Nigerian Army.

A statement signed by Major NC Agwu, Assistant Director, Army Public Relations, said the curfew came into effect as rioters embarked on violence, looting shops and blocking the Lagos – Kaduna Road, a major artery connecting the northern and southern parts of the country.

“Regrettably, one church, one house and a shop were burnt while 25 other shops were looted following the violence. Three other persons including personnel of the NSCDC also lost their lives” it said.

The Army general public to abide by the conditions of the curfew and go about their legitimate businesses without any fear of intimidation.
You must log in or register to reply here.